The newest addition to the PU timing belt range of Wilhelm Herm. Müller is the heavy-duty timing belt BRECOFLEXmove AT10, especially designed for heavy-duty drives with high rigidity requirements. A newly developed steel cord tension member with a slightly increased diameter increases the rigidity by almost 70 % in comparison with the previous model, but remains easy to bend. At the same time, the larger tension member cross section increases the tear resistance and permissible tensile forces.

Higher tensile forces create higher tensions in the tooth foot and higher surface pressure on the tooth flank. Using the Finite Element topology optimisation, material has been redistributed to develop a tooth geometry which distributes the load on the tooth more evenly, but nevertheless fits into the existing AT profile pulleys. In addition, the tooth flank of the BRECOFLEXmove timing belt is protected by a PE laminate which is wear-proof and achieves lower friction coefficients.

Depending on the pulley diameter, the narrower belt pulleys lower expenses significantly. BRECOFLEXmove AT10 polyurethane timing belts are available in widths of 25 to 100 mm. 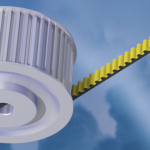 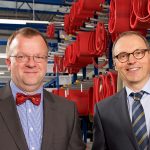 Wilhelm Herm. Müller celebrates 100-year anniversaryNews
We use cookies in order to optimize the website and to improve it continuously. By continuing to use the website, you agree to the use of cookies. More